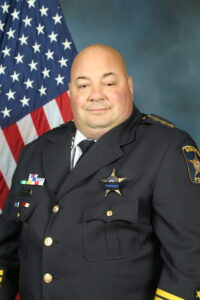 In 1987 I started my career as an Auxiliary Police Officer with the Berwyn Police Department.  Soon after, I was hired as a Probationary Berwyn Police Patrol Officer and I enrolled in the Chicago Police Academy.  I successfully completed the Chicago Police Academy in July of 1988.  While working as a Berwyn Police Officer, I was assigned to various positions within the department.  Over the course of my career I served in several different roles: Patrol Officer, Detective, Juvenile Officer, Tactical Officer and Evidence Technician.

In June of 2000 I was promoted to the civil service rank of Sergeant.  My passion for serving the community through law enforcement along with my commitment to leadership motivated my continued career climb.  In 2005 I was assigned as the Watch Commander of the afternoon shift by Interim Chief Carl Dobbs. Subsequently, I was promoted to the position of Division Commander in 2009, where I oversaw the entire Patrol Division and the Auxiliary Police Contingency.  With 29 years dedicated to the Berwyn Police Department, I was assigned as the Acting Police Chief in 2016.  The following year, I was appointed to my current position of Police Chief of the Berwyn Police Department.  It is an honor to lead the Berwyn Police Department as we serve and protect the amazing city that raised me, Berwyn.